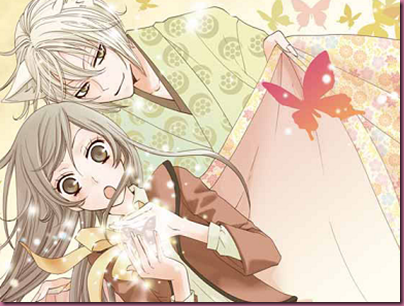 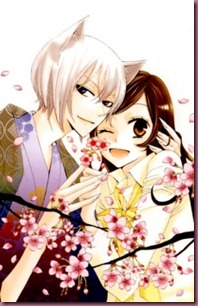 When a homeless girl named Nanami Momozono is saved by a man in a trench coat from a dog he suddenly offers his home to her, she accepts the offer without a second though.But it turns out that the so called “home” offered to her by this man was actually a SHRINE! And turns out this man is actually a land god! What will Nanami do when she has to take over his duty as the new land god and meets a fox-familiar named Tomoe who doesn’t like her? What will this girl do? Will romance bloom between a yokai and a human? Will Nanami be able to put up with this fox familiar? Read and find out!

If you love the YokaixHuman love story then this is the manga for you! The story is really cute but they are not all that lovely dovey. You might have to be patient if you want to see the real action begin (by action I mean progress between them). Also the art is good. The progress of the story is really good, how Nanami (the main heroine) meets all kinds of people and the history of the fox familiar Tomoe and who was the man that offered his house(Shrine) to her. The story is also has a blend of comedy so if you love comedy and romance blended together in one glass then this is the one. This manga is also still currently being published so the quote “Patience is a virtue” will indeed be needed so for as of now the manga is still in it’s 66th chapter so stay tune for upcoming chapters.

I recommend reading either in Mangareader or in Mangafox since I think these sites are the fastest in updating but all other sites are also good.

I am a simple high-school girl. As the author of this site. Naturally I am an otaku, I love everything about anime and manga except the genres yaoi, yuri, ecchi and mature. My favorite genre is mostly slice-of-life. but I also love gender bender anime/manga. So in other words I love different kinds of anime and manga, and I am actually picky when watching or reading one. Usually the first thing I look is the genre I really don't know why though...or the title itself. (Am I weird?) But nowadays I now read the description first. Well that's all about me. Feel free to ask me anything about anime or manga I'll be sure to reply :)